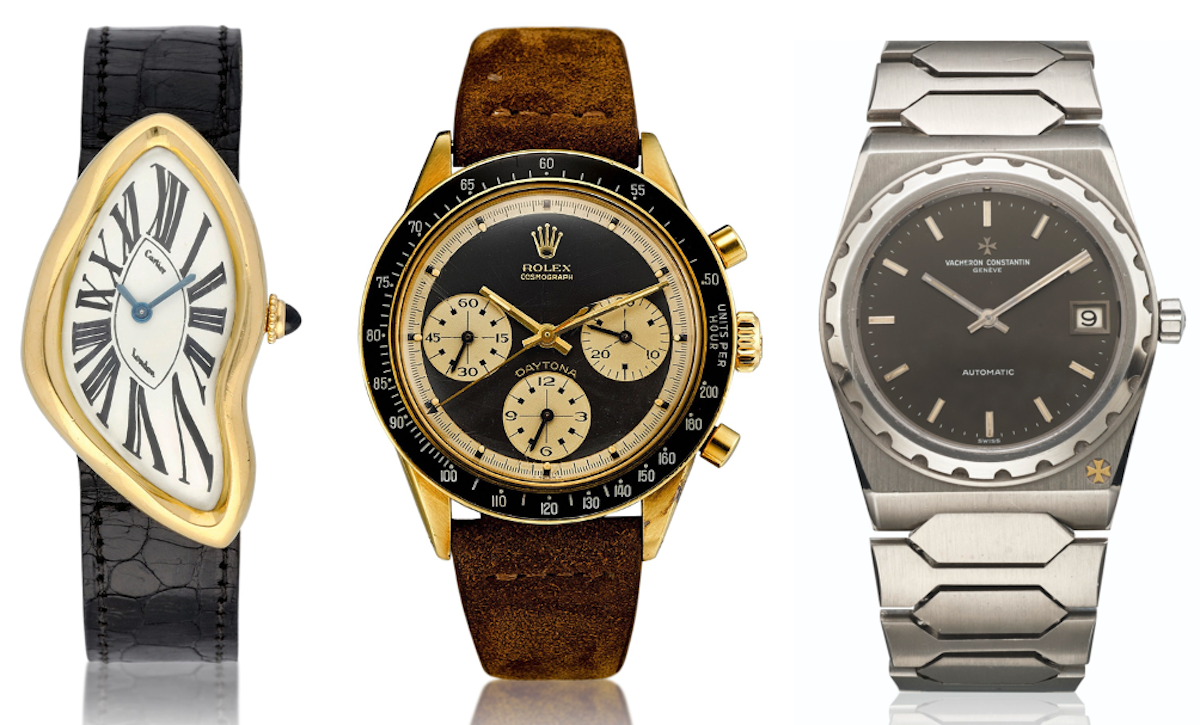 Clearly, Rolex still emerged as the strongest brand in the auction month. Patek Philippe and Audemars Piguet also continued to deliver solid numbers. Aside from the said brands, it can be observed that there are winners across the board. Cartier, Omega, and Vacheron Constantin are some of the other winners. The watch market continues to display strength despite the pandemic.

Let’s look into some of the interesting watches sold during the November auctions.

The Crash has been produced by Cartier sporadically and in limited numbers. This said model was one of the first ones ever produced. There is a rumor that says that the design of the Crash was brought about by a damaged and melted Cartier Baignoire from a crash. The watch was recently brought to the spotlight by Jay-Z and Kanye West.

The Vacheron Constantin Ref. 222 is the ancestor of the Overseas. The 222 was released in 1977 to commemorate Vacheron’s 222nd anniversary. This watch and the Overseas have long been overlooked by collectors. In the 2010s, watch collectors became obsessed with the stainless steel-unibody watches especially from Patek Philippe (Nautilus) and Audemars Piguet (Royal Oak). As supply of Patek and AP became difficult, collectors started to realize the true value and beauty of Vacheron Constantin. With more people collecting the Overseas, the demand for the 222 has also increased. Watch Manila was one of the publications which recognized that the Overseas was a hidden treasure in the watch world.

Watch Manila has observed that the watch industry in the 2010s has been dominated by a shift towards simple watches in stainless steel. With the demand heavy on the said watch class, the demand for fine watches with complications dropped. Watch Manila believes that as more collectors mature and get over the hype stage, the same crowd will start to go for undervalued fine timepieces. This Vacheron Constantin Minute Repeater in gold is a watch which could symbolize the potential up and coming resurgence of fine timepieces with complications.

The Rolex Daytona “John Player Special” label originated from the 1970s when John Player & Sons sponsored the Lotus F1 team. According to collectors, the JPS Daytonas are reminiscent of the design of John Player & Sons. Sotheby’s noted that most of the Ref. 6264 Daytonas were made in stainless steel. There are approximately only ten known pieces in yellow gold. From the ten, there are even fewer Daytonas fitted with the JPS dial.

In addition to the details mentioned in the previous item, it is worth noting that this is the third most expensive Rolex Daytona sold in auction. With many people being fascinated with Paul Newman Daytonas, collectors are zeroing in on John Player Specials since they are rare as well.

When the Day-Date was launched in 1956, it became the ultimate Rolex watch. The Day-Date was only available in precious metals: gold and platinum. This notwithstanding, the watch sold at the recent Phillips auction was one of a few Day-Date prototypes produced by Rolex in stainless steel.

These watches do not need an introduction. The two watches are two of the hottest Rolexes in the market. In their current iteration, they retail for around P517,500. But it is almost impossible to pick one up at your authorized dealer. What’s important to note is that these watches still have strong demands as they both sold for more than double their retail price. The hunt for the steel Rolex watches continues to be tough.

Philippe Dufour is one of the most sought-after independent watch brands. Its pieces command high prices due to the limited production and due to the high quality of watchmaking. The watch which was recently sold doesn’t feature any major complication and doesn’t even feature a date. However, this watch is an example of how Philippe Dufour perfected the “simple” watch. What is amazing is that the winning bidder paid a mind-blowing P41.3M for the said watch.

Stay tuned for part 2 of the notable watches in the recently concluded November auctions.

Images are courtesy of the auction houses: Antiquorum, Christie’s, Phillips, and Sotheby’s.